La Seca, November 13, 2020.- The renowned British journalist specialized in oenology Tim Atkin – considered the fifth most influential wine expert in the world – has published on his website his scores and tasting notes for 5 elaborations of the Cuatro Rayas cooperative winery, a leader in the production of white wines. under the Rueda Designation of Origin.

All the wines from this winery tasted by Atkin have been valued with scores higher than 91 points, which proves the excellence of the wide range of white wines made with Verdejo grapes – and, in the case of ’61’ Dorado en Rama, with the almost extinct Palomino Fino variety- produced by this cooperative that brings together the work of more than 300 wine-growing partners from the provinces of Valladolid and Segovia.

This aging Verdejo made with Verdejo grapes from old vines, some of them even pre-phylloxera, planted in glass and harvested by hand, has reached 95 points, the highest rating given by Atkin in the Rueda wines category. Atkin describes it as “one of Rueda’s most ambitious whites” and expresses that it is a wine with “amazing intensity and focus” in which he finds notes of “pear, citrus and marzipan, with a background of fennel and cinnamon. , good structure and acidity “.

Regarding the first vintage of Amador Diez, the most traditional and meticulous elaboration of Cuatro Rayas, the British Master of Wine comments that its “oxidative handling will be attractive for lovers of Rioja whites” and highlights its potential for development in the bottle. . On its tasting notes, in it you find “a lot of toast and spices and pear and saffron flavors” as well as saline notes.

This Verdejo made from vines that are at least 80 years old has not only conquered Atkin’s palate in this tasting of references from the Valladolid winery, but it already caught his attention a few weeks ago during the preparation of the virtual tasting that the British journalist He dedicated to the wines of the Spanish northwest in the platform of digital events focused on the world of wine “The Three Wine Men”, in which he actively participates. 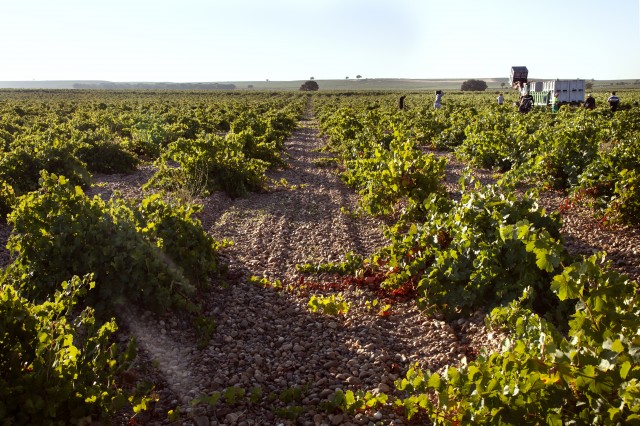 During the event, which was broadcast live and had the participation of Raquel Fernández, head of Export for the United Kingdom of Bodega Cuatro Rayas, Atkin praised “the natural acidity” of this wine and its combination with the “touches of wood and the texture that old vines give it. ” Days before the tasting, Atkin commented on Cuatro Rayas Viñedos Centenarios 2019 on his social media profiles that this is a “magnificent, slightly woody Verdejo that shows both concentration and freshness. Notes of pink grapefruit and wild herbs are combined in a Exciting shape on the palate with a salty finish and a hint of vanilla spice. ”

This limited-run production of Bodega Cuatro Rayas is characterized by its vocation to preserve both the traditional elaborations of the area and the use of the Palomino Fino variety, of which the cooperative conserves a small plot and whose planting is currently prohibited in the DO Wheel. A golden wine without vintage that is made in halves with Verdejo and the aforementioned Palomino and that is bottled without clarification, and about which Tim Atkin expresses that it is “unusual and complex”, with touches of “yeast and a salty and refreshingly acid finish. “.

Made from Verdejo variety grapes from vineyards at least forty years old and with bâttonage in deposit on its fine lees for at least 5 months, this Verdejo is described by Atkin as “rich and almost exotic, with notes of lychee. and peach “and with” tasty acidity “; It also stands out for its excellent value for money.